In this problem we will explore a simple example of a suspension system for a vehicle. In general, mechanical systems respond differently to different inputs. One categorization of inputs is in terms of "frequency content". We will analytically study a simple mechanical system to understand its response to the three kinds of inputs shown in the figure below: 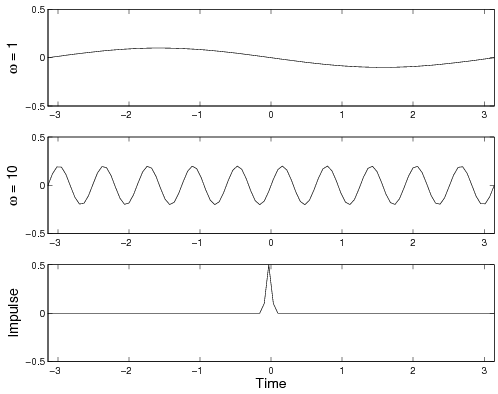 One aspect of a car's dynamics is the interaction of the car chassis with the suspension. As a crude model, we will treat the chassis as a lumped mass

, and the suspension as a linear stiffness with constant

. We will also assume that the suspension includes a viscous damper (shock-absorber) with damping coefficient

is the input force from the ground. The three inputs shown represent relatively smooth road, very bumpy road, and a single isolated bump.