Exercise: Moving your finger through a flame without getting burned 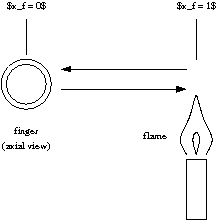 Using the MATLAB ode45 function (or something similar), build a model for the system and solve the following: